Hello friends, and welcome back to Taylor Tuesday! Today we are going to look at Taylor's Featured Artist Jason Mraz. Taylor has many artists, but only a select few are featured artists, and Jason Mraz is one of those few. Mraz grew up in Virginia, in a town called Mechanicsville, and stayed there until he attended the American Musical and Dramatic Academy, which is located in New York, for a year and a half. After that he returned home to Mechanicsville for a short time, doing odd jobs and enrolling in college before deciding to take a road trip west. That was how he ended up in San Diego. He liked the city, so he decided to stay. The Virginia Native first rose to prominence in the year 2000, playing coffee shops in San Diego. His first studio album was released in 2002, and was titled "Waiting For My Rocket To Come". His second album, "Mr. A-Z" was a major success, and broke into the top five of the Billboard 200. His third studio album, "We Sing. We Dance. We Steal Things." contained his hit single , "I'm Yours" and debuted at number three on the Billboard 200 Chart, while, "I'm Yours" peaked at number six on the Billboard Hot 100. "Love Is A Four Letter Word", his fourth album, peaked at number two on the Billboard 200, making it his highest charting album. His fifth album, "Yes!" was released in 2014. 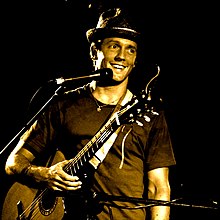 Mraz plays on his signature Taylor NS72ce, which is a beautiful nylon string guitar made with Indian Rosewood back and sides, and a Western Cedar top. The guitar features special inlays with the words "Be Love" on the ebony fretboard. To Fall in Love with a Taylor today, click the link here!