Hello friends and welcome back to another addition of our Taylor Tuesday Blog series. Today we will be covering the Taylor Featured Artist Javier Colon. The winner of the 2011 and inaugural season of The Voice, Colon has gone on to produce his own style of music he refers to as "acoustic soul", working with various record labels and consistently being praised by critics and industry professionals for his willingness to go his own way and for amazing vocals. He also heavily favors playing on an amazing selection of Taylor Guitars! Javier Colon was born in Stratford, Connecticut on April 29th, 1978 and he went to high school at Frank Scott Bunnel High School. It was at this time he began writing music, but he had been steeped in music for most of his life, as his dad worked at a radio station. Due to this lifelong relationship with music, he decided to pursue a degree for music education from University of Hartford's Hartt School. It was while at college Javier would take up a role as lead vocalist and percussionist for the band EmcQ, but he would leave them after being signed as a solo artist by Capitol Records. He would release two albums with Capital Records, Javier(2003), and Left of Center(2006), with both receiving moderate commercial success, while garnering widespread positive reviews for his unique style. He would leave Capital Records and release a third album independently in 2010, an EP titled The Truth - Acoustic. 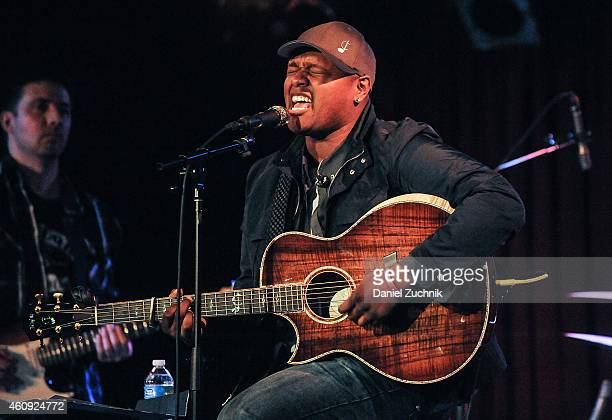 It was in 2011 that he would enter on the TV The Voice, and be met with widespread acclaim on the show's inaugural season, with Judge Adam Levine describing Colon's voice as follows, "Competition or no, you have one of the best voices I've ever heard, ever!" After winning the voice, he would release his third full length album with Universal Republic Records, titled Come Through for You. After it's release, Colon would leave Universal, siting a lack of support from the company. In 2014, he signed with Concord Records and in 2016 he released his fourth album, Gravity. Javier Colon has been known to play a lot of Taylors, but his primary Taylor is a 814ce, pictured below with a Sitka Spruce top, and Indian Rosewood back and sides. To visit the Heartbreaker Guitars posting for a similar 814ce, click the link here! Trying to find out which Taylor guitar your favorite artist plays? Check out the full list of official Taylor Artist's on their site!